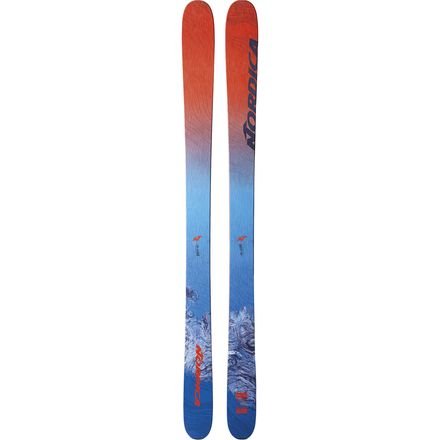 LAY DOWN THE ALL-MOUNTAIN LAW.

Keeping order on the tough slopes is a tough job, but somebody's gotta do it, and who better than the lawman who's riding the Nordica Enforcer Ski? Whether you're rounding up rustlers on the groomers, chasing down scoundrels in the trees, or tearing up pow in pursuit of purloiners, the Enforcer's moderate 100mm waist and playful but stable feel will help you have more fun than any respectable sheriff should, so you can hit the whole mountain hard in addition to maintaining law and order.

There's nothing particularly revolutionary about the Enforcer's construction, but there doesn't have to be, because it's such a solid ski. Nordica built it on a wood core that gives it a surprisingly poppy and nimble character without a flimsy or lightweight feel, so you can boost off small lips and little pillows without giving up stability when it's time to hammer through chop. The Energy 2 Titanium construction lays down a titanium laminate on either side of the core to supply the damp and stable feel that only metal can provide, while full ABS sidewalls prevent the Enforcer from twisting under serious edging forces and flapping around when you're hitting extra-legal speeds.

The Enforcer has a pretty traditional shape, too, with 80% traditional camber for bombproof edging, 15% nose rocker for just enough float in pow and smoothness in chop, and a 5% smidge of tail rocker to let you get juuuust loose enough in soft snow. It's also cribbed the snubbed and low-profile Hammerhead nose from the extra-burly Patron, so you won't have to deal with excess vibration or a hooky feel in the tip. Nordica engineered the topsheets to shed snow so you don't have to haul extra weight around with you, and finished the Enforcer off with burly and lightning-fast UHMW bases to provide that extra juice you need to stay ahead of the powder-plundering criminals.

M2S Outfitters offers Free Shipping on orders over $ 50, 30-Day Returns, and a Price Match Guarantee on all sales.